Back to All news

Price stability relates to inflation, which is the rate at which the overall prices for goods and services change over time. More precisely, price stability means a low, stable and predictable inflation rate. Maintaining price stability is the primary objective of the Eurosystem - the European Central Bank (ECB) and the national central banks (NCBs) of the euro area - and of many other central banks.

Why do central banks pursue the objective of price stability?

Price stability has positive effects on the economy and on the living standards of citizens. High inflation, that is a significant increase in prices year by year, has many negative effects. For instance, it reduces the value of money and therefore of savings; it harms the less well-off; it obscures the changes in relative prices thus making it harder for households and firms to make informed decisions on consumption, production and investment; it causes an increase in interest rates; and it generates an automatic increase in taxation as nominal gains grow and may move into higher income tax brackets.

Economic research has shown that, on average, lower-inflation economies have higher growth in production and income in the long term. Therefore, by maintaining price stability, a central bank plays an essential role in raising the productive potential of the economy and in improving employment prospects.

What does price stability mean in the Eurosystem?

The definition of price stability varies across different institutional contexts. As for the Eurosystem, the Governing Council of the ECB aims to achieve inflation rates in the euro area close to 2% over the medium term.

Why a 2% inflation rate?

The 2% objective was mainly established because, on the one hand, it does not involve too high a cost for the economy and for citizens and, on the other, it provides an adequate margin to avoid the risk of deflation (a general and prolonged decline in prices). Indeed, deflation can be as detrimental to an economy as high inflation: when households and firms expect a decline in prices, they tend to defer purchases and investments in order to pay less in the future, which has negative effects on the economy. 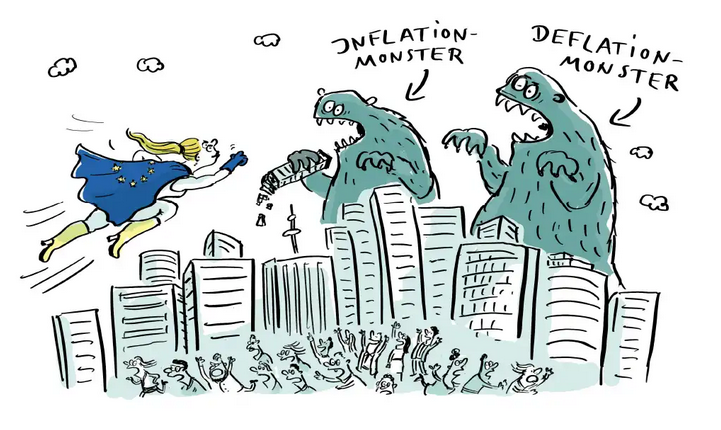 Why is it a medium-term objective?

The wording "over the medium term" is due to the fact that both the inflation process and the monetary policy transmission mechanism are uncertain.

Monetary policy, that is the set of decisions made by the ECB in order to achieve the goal of price stability, cannot and sometimes must not fine-tune developments in inflation over the short term. The effects of the ECB's decisions, as of those of the other central banks, are subject to a significant time lag.

Furthermore, some changes in inflation may be temporary: the medium-term approach means the central bank does not have to respond to each price fluctuation immediately, taking unnecessary measures which may have undesirable consequences on growth and employment.