sei qui: Home > News > We're talking about the spread again. What is it? And why does it move?

We're talking about the spread again. What is it? And why does it move?

Back to All news

And, most importantly… does it affect my financial decisions?

The spread is back in the spotlight because it has been increasing for some months, even though it remains well below the highest levels of the past. On 14 February, it got to around 1.7 per cent. When the pandemic broke out (March 2020), it got to 2.8 per cent. The highest value was 5.5 per cent in November 2011, during the euro-area sovereign debt crisis.

The spread trend since 2009 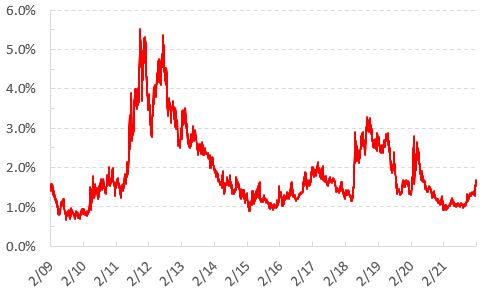 So, what is the spread and why does it move? Let's try to shed some light on it.

What is the spread?

In finance, spread is a generic term that indicates a difference among prices, yields or the interest rates of two financial instruments. This difference can be a very useful indicator for investors. For instance, if we compare two bonds with the same characteristics (maturity, type of interest rate, currency and so on) but issued by two different subjects, the spread reflects the difference in the capacity of the two issuers to refund the borrowed money (or rather, how investors assess this capacity over time). The spread is therefore a measure of the bigger risk taken when investing in the bond with the highest yield.

However, when talking about the spread, the non-specialised press refers to a very specific difference, the one between the yield on an Italian state bond, a BTP (Treasury bond) with a ten-year maturity, and the yield on a German state bond, a Bund, with the same maturity. Let's remember that the higher the yield on a bond, the higher the risk taken. If, for instance, the BTP yielded 2 per cent and the Bund yielded 0.5 per cent, the spread would be equal to 1.5 per cent, or to 150 basis points (100 basis points correspond to 1 per cent). Germany was chosen as the benchmark as it is considered to be the most trustworthy country in the Eurozone. The higher the spread, the riskier the Italian bond is considered to be in comparison with the German one. Therefore, the spread is a measure of how investors perceive the Italian state to be riskier than the German state in its capacity to refund money borrowed by issuing state bonds.

Why does the spread increase?

Every year, Italy issues about €400 billion of new debt, and every year somebody has to buy that debt, i.e. state bonds: buyers could be Italian savers, retirement funds, insurance companies and hedge funds. If their perception of the State's ability to refund the debt gets worse, these investors will demand higher interest rates and the spread will therefore tend to go up.

However, the spread can vary even when the investors' assessment of the state's ability to refund the debt doesn't. This happens at times when investors become more risk averse, i.e. less keen on making losses, typically during financial crises when there is a lot of uncertainty over the economic outlook.

The spread began to go up last October due to investors' uncertainties concerning the evolution of monetary policy in the Eurozone and the consequences this could have had for the most indebted countries.

Over the last few weeks, investors' worries at global level have contributed to the increase in the spread, due to the rise in inflation, possible interest rate hikes and the geopolitical developments in the Ukraine crisis.

How can an increase in the spread affect your financial choices?

If you have already invested your savings in state bonds, the increase in the spread generally corresponds to a decrease in your bonds' value (when yields go up, bond prices go down). On the other hand, if you are thinking of buying a state bond, you could earn a higher yield than before, but it's important to understand what the bigger risks are that are pushing the spread up.